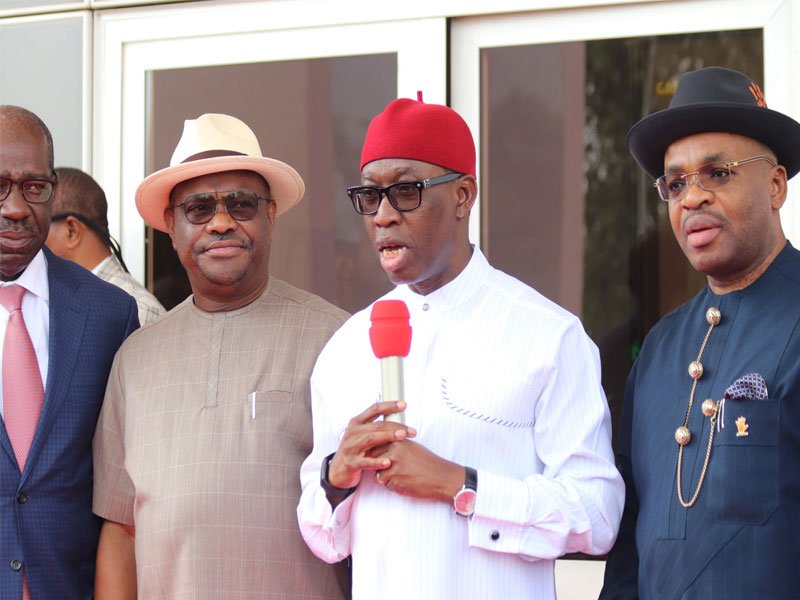 Governors of the south-south part of Nigeria have reiterated the approbation of a regional security outfit.

The governors under the umbrella of the south-south governors forum, notwithstanding, did not disclose when the security outfit will be launched.

The governors took the choice during a coming together of the forum in Port Harcourt on Monday.

Amongst other resolutions passed at the coming together, the forum also resolved that the governments of the states in the part would bring together in the suit challenging the collection of Value Added Revenue enhancement (VAT) by province governments.

The chairman of the forum and Governor of Delta Province, Ifeanyi Okowa, who read out the resolutions, said “we approve the regional security architecture which would be launched rattling presently.”

He also disclosed that the governors “unequivocally supports the choice for states to gather value added taxation and resolve to bring together the suit before the Supreme tribunal.”

They also asked “the National Assembly and the President to take essential measures to review some unfair aspects of the late signed Crude oil industry bill at present deed to ensure fairness and fairness.”

The coming together was attended by Governors of Delta, Edo, Bayelsa, Akwa Ibom and Rivers.

Cross Rivers Province Governor, Ben Ayade was, notwithstanding, absent from the coming together.